According to Reuters online, last Thursday, nine NHL players have filed a class action lawsuit against the NHL. These players are claiming that the NHL "subjected the players to imminent risk of head trauma" that could lead health concerns later on in life.

This comes as the second lawsuit against the NHL in five months. Reuters states the players are alleging that the league is not doing enough to prevent concussions. One of the quotes taken from Reuters, "the NHL has failed and continues to fail to warn its players of these risks and consequences of head trauma".  Also in the suit are claims that the NHL has "concealed material scientific and anecdotal information from the players."

Many of the players feel like they are not getting the information they need to protect themselves and possibly avoid head injuries, and more importantly, concussions.The players want more policies and protocols that could protect them from these head traumas, sustained in games or practices.

A similar lawsuit was filed last year which started out with 10 players has now grown to over 200 players. While the NHL has not responded, many believe that it is now time to focus on player safety over profits and traditions.

Both of these suits are very similar to the suit filed by NFL players last year, which the NFL paid $765 million to settle. If more players begin to speak up, then the NHL has no choice but to change their player safety regulations and protocols.

Athletes are no different from those of us who have a 'regular job'. If they get hurt, they can no longer do their job. Much like people with a 'regular job', they can file for worker's compensation and get information they need to protect their health, career and family. Everyone, including athletes need to be protected on the job.

If you have been hurt on the job and have questions, please contact us and we may be able to assist you in your case.  We help pro athletes, union workers, construction workers and lots of other people with workers compensation cases.

For more information on on the job injuries, just request your free copy of Protect Your Rights: The Ultimate Guide to D.C. Workers' Compensation  and The Union Worker's Guide to Worker's Comp.

For more information on this story, please click the link. 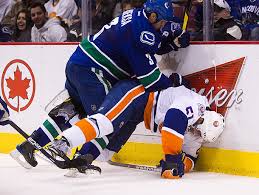 If you were seriously hurt at work DO NOT talk to any insurance adjuster, nurse case manager, give a recorded statement or sign anything. Before doing any of that, you need to read the only book of it's kind written just for injured workers: Protect Your Rights:  The Ultimate Guide to D.C. Workers' Compensation. Written by nationally recognized, board-certified trial attorney Frank R. Kearney, this book explains your rights and responsibilities when you get seriously hurt at work: everything the insurance company won't do.

Now in its third edition, this is the book the workers comp insurance company doesn't want you to read.  You will learn insurance company tricks, traps and tactics, when, where and how to file your workers comp claim, your rights to medical care - and how to avoid mistakes that could literallly cost your family hundreds of dollars every single week that you can't work.

Order yours today or give us a call at 202-393-3320 and speak to a live person who will send it to you today. But don't wait - you may not know it yet, but the insurance company already has experienced lawyers, nurses, case managers and adjusters working on your case - and who do you think they work for? Hint:  it's not you...