Precautions to Take Against Heatstroke This Summer 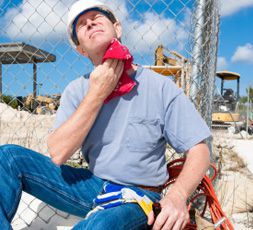 Nine years ago NFL player Korey Stringer collapsed at training camp, where the heat index had reached 110. Stringer died later that day due to complications from heat-stroke. While in the hospital, he had a body temperature of 108 degrees.

He was only 27 years old and played for the Vikings. If the NFL controls the sport closely, how could something like this happen? And how much of a risk is the heat for the typical weekend athlete or someone who earns his living working outside?

The institute states that most of the deaths involve children, but adults are still affected as well. Most often the deaths (heat-related) occur on the football field. This is because the athletes are pushing themselves in the heat because they are trying to secure a spot on the team, they may ignore the signals their bodies are sending them.

According to weather reports, this June has been recorded as one of the hottest and we are still moving into the hotter summer months. Experts are warning those to take precautions against heatstroke, heat exhaustion, heat syncope and heat cramps.

Even severe heatstroke is preventable is the person is immersed in cold water within 10 minutes of collapse. But often times, most people cannot recognizes the symptoms and it is too late, ending in a fatality.

Here are some things to look out for:

Quickly recognizing and responding to the symptoms is critical. However, half of all heatstrokes occur without warning.

Athletes should take these precautions, as well as those who work outside. Many workers are focusing on their work and getting the job done, especially if they are on a tight schedule or a temporary worker, and they do not take time to rest and drink enough water. Employers, when the heat index is really high, should be reminding their employees to drink water and take breaks.

If you're an athlete, coach or worker, look out for these signs and symptoms and take measures to protect each other.

For more information on this issue go to The Washington Post.com.