The Super Bowl And Workers' Comp For Pro Athletes 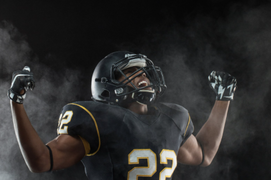 Unless you have been hiding under a rock for the past two years you have heard about the controversy surrounding Colin Kaepernick and his kneeling during the national anthem. His actions have resulted in a high-level tension between the league and players even two years later....drama that is amped up even by normal Super Bowl standards. The press is covering the solidarity movement by stars who have refused to perform in the Super Bowl just about as much as they are covering the game itself.

Regardless Of How You Feel About Kneeling Or Standing, There Are Some Considerations That Jump Out At Me

And here's what I've been thinking lately: Kaepernick has reportedly made 40 million from playing football. He is currently a free agent. He might still want to play football, but at $40 million made from the game and probably a promising career outside of football on the horizon, he's not being stretched financially by not playing.

This is not the type of athlete that we are hoping to help with our workers' comp program for professional athletes (just because at 40 million they probably don't need workers' comp). We help the player who suffers a career-ending injury, has multiple injuries he deals with after his playing days are over.  Usually, the player didn't play for years and years or spent a lot of time going back and forth between the minor or developmental leagues and the major league of his or her sport - and usually, we're talking about hockey, baseball, soccer, and basketball (including the WNBA) sports played professionally in D.C.

The Dedication Of An Athlete Is Respectable. However, It Is Important to Recognize When You've Got A Serious Injury

Here at Donahoe Kearney, we have enormous respect for professional athletes. A lot of people probably think it's just about playing for a living, but it's so much more than that. Just check out this excerpt from an article by Jason Simontacchi (former Nats player) that we included in our book.

And when you do make it, you see guys get hurt and constantly ask themselves “can I play through it?” After all, playing is your livelihood and you know you have a short window to play any sport professionally. The organizations have the advantage – they know you’re hurt but ask you to play anyway. If your production falls because of injury, it’s almost certain they’ll bring in someone else. The bottom line is pro sports is a business. As a player, the only one who will watch after you is you.

We know how hard it is to make it in the big leagues of professional sports - for Kaepernick or for anyone else. And for those who are in the game and don't know what their rights are if they get hurt, you're who we want to help.