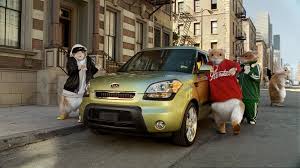 A 27 year old man known for being one of the dancing hamsters in the Kia commercial has been arrested for fraudulently collecting money for workers compensation. Leroy Barnes has allegedly been accused of deceiving his doctors about his employment status while he was receiving disability benefits.

Back in 2010 Barnes was struck by a piece of ceiling while on the set for a sound check.  At the time he was working as a dancer and from September 2010 to September 2011, he had been receiving disability insurance benefits that totaled $51,000. During this time Barnes had stated that he was not employed.

It was during this time that Barnes had starred in the Kia commercial as the dancing hamster. He had also preformed with a rap group under an alias and did back up dancing for stars like Madonna, Kelly Rowland and Chris Brown under a different alias, authorities reported to KTLA.

Barnes appears in court on July 2nd of this year.

A quote taken from the news report by Insurance Commissioner Dave Jones, "Fraudulently collecting disability benefits is not only illegal, it disrespects  legitimately injured [people] who are unable to work" This is true. He is breaking a law and giving legitimate, hard working people who have been hurt on the job a bad name.

In D.C., Maryland and Virginia, there are times when you can work light duty after an injury and there are different types of workers compensation benefits like,  temporary partial disability, and permanent partial disability to account for reduced earnings.

For more information about workers compensation and how to get started, call our office at 202-393-3200 or send us an email at [email protected]. When you call, we give you a free and confidential consultation. While we are a small firm, we do our best, but sometimes we cannot help everyone. If you cannot take your case, we will refer you to someone we trust.

For more information on this story, go to the KTLA website.

If you were seriously hurt at work DO NOT talk to any insurance adjuster, nurse case manager, give a recorded statement or sign anything. Before doing any of that, you need to read the only book of it's kind written just for injured workers: Protect Your Rights:  The Ultimate Guide to D.C. Workers' Compensation. Written by nationally recognized, board-certified trial attorney Frank R. Kearney, this book explains your rights and responsibilities when you get seriously hurt at work: everything the insurance company won't do.

Now in its third edition, this is the book the workers comp insurance company doesn't want you to read.  You will learn insurance company tricks, traps and tactics, when, where and how to file your workers comp claim, your rights to medical care - and how to avoid mistakes that could literallly cost your family hundreds of dollars every single week that you can't work.

Order yours today or give us a call at 202-393-3320 and speak to a live person who will send it to you today. But don't wait - you may not know it yet, but the insurance company already has experienced lawyers, nurses, case managers and adjusters working on your case - and who do you think they work for? Hint:  it's not you...