Last month Graco Children's Products issued a recall on an estimated 4.2 million car seats. The company states that there is a bulky buckle that could make it difficult to free a child in an emergency. On the heels of this information, The Evenflo Company has also issued an recall for 1.3 million of their child restraints for the same issue.

The NHTSA wants both companies to iinclude the rear-facing car seats to the list as well because they have the same buckle defect. For Graco this would mean an added 1.8 million infant car seats. Both companies have declined to add the infant car seats to the lis t- stating that the portion holding the infant can be detached from the base, which is anchored to the seat of the vehicle. Both are apparently saying that for this reason, it des not matter if the buckle is hard to open. However, NHTSA disagrees and wants the infant seats to be recalled.

Evenflo and Graco used buckles that had been manufactured by AmSafe Commercial Product of Elkhart, Ind. However, Evenflo based in Piqua, Ohio says they no longer buckles from that firm.

The recalls come after complaints from parents that led to investigations from NHTSA. Some parents said they had to cut their child out of the car seat. And NHTSA's fille on Graco include a wrongful-death suit in California-a child died of burns in 2011 after a crash because her mother could not easily free her from the seat. Graco settled out of court stating that the buckle was not at fault.

NHTSA is demanding that both companies send additional information about their refusals to include the infant seats warning that withholding information could lead to a criminal investigation.

Both companies are going to be sending the replacement buckles to the owners for all the child restraints being recalled. 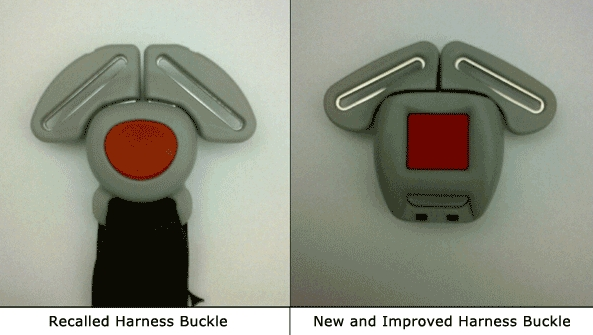 For more information about the child restraint recall--follow the link.

And if your child was injured due to an unsafe product or in an automobile accident, contact us for more information on how we can help you and your family.

For a full list of car seats being recalled, please visit our blog.