Have You Seen This Version of Lunch Atop a Skyscraper?

There’s a cool mural on the corner of 19th and Pennsylvania, I don’t think I had ever seen the “Lunch Atop a Skyscraper,” photograph. If I did, it was a long time ago and I didn’t remember anything about it.

I love history, and I was immediately rewarded for my quick Google search with lots of information about “Lunch Atop a Skyscraper.” As it turns out, these men were building out the Rockefeller Center complex in the 30s and the photograph portrays them having lunch more than 800 feet in the air above the City of New York.

Or so it would seem. 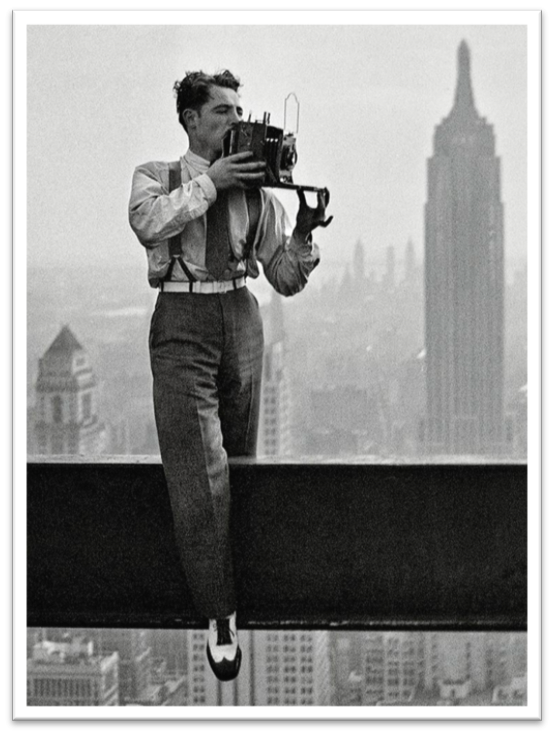 There is a dispute surrounding the actual circumstances, but it seems widely accepted that “Lunch Atop a Skyscraper” was a staged photography event designed to promote the new Rockefeller Center. Images of photographers up there, also taking crazy risks, seem to support this theory.

It has also been said that the men on the beam (with no fall protection, mind you- fall protection wasn’t a thing back then) were actually just a few feet above with a landing that was just below the frame of the photograph.

I’m rather anxious to believe that wasn’t the case.

To me, the men in this picture represent a generation of men who weren’t afraid to get their hands dirty. Who weren’t afraid to do the heavy-duty work. I like to wax nostalgic about a time when the people who worked the hardest got the jobs. Because, history says there weren’t that many to go around.

I would love to believe that they were a group of men unafraid and unaffected, sitting atop that beam, 840 feet in the air. Having lunch. Drinking liquor at noon. Smoking cigarettes. There were many immigrants but no politics. Just men, getting the job done.

In the individualized world we are now living in, it’s reassuring to reference a time when people just got the job done for the purpose of getting the job done. And had a little fun scaring people with their death-defying antics along the way.

But this mural depicting the famous photograph really caught my attention. Only about 500 feet from our office, I had barely noticed it when it appeared a few months ago, seemingly out of nowhere. At the time I had thought to myself “oh, that’s a nice yellow painting” but didn’t crane my neck to see that it was 8 women on a narrow metal beam, in hues of red, yellow, blue, and orange.

The first thing I noticed about the mural is that the women were all oriented toward one another, which I think is a heartwarming way to portray women in the workplace. As opposed to the original photograph where the men are mostly oriented parallel to one another, these women are clearly engaged, talking, touching a shoulder. They are dressed in different professional and trade wear and they are different ethnicities. Connected. On the same team.

The artist (find out who it is) did a really good job of portraying modern women in the workplace, who can do or be anything, without making any overtly political statements or sending any strident messages.

Come check it out and let me know what you think!