When Does Cerebral Palsy Start To Show?

What Are the Signs Of Cerebral Palsy? 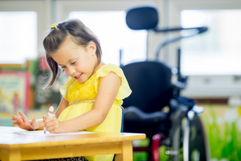 Cerebral Palsy is a condition resulting from lack of oxygen to the brain during birth, called asphyxia. Although you may have awareness of having a traumatic birth, you may not even know that your child has Cerebral Palsy until he or she is one or two or three years, and even five years old. Sometimes even later.

If there was a traumatic birth the doctors should (but most of the time don't) make you aware of the risk of Cerebral Palsy. The reason for this is because many times, traumatic birth is a result of malpractice - many times you and the baby showed signs of distress, both maternal (mom) and fetal (baby) and the doctors at the hospital didn't take action to deliver the baby until it was too late and the damage was done.  And a lot of times, we see interns and residents taking care of labor and delivery patients in DC hospitals - sometimes they don't know when to call the attending physician or a specialist to evaluate you and the baby.

Diagnosis of Cerebral Palsy usually comes after you and  your child's doctor (pediatrician) begin to notice that your child is not reaching his or her developmental benchmarks or milestones.  In some cases, it is diagnosed in the NICU when the baby is very young. Some of the noticeable benchmarks include rolling over, sitting,crawling, and walking. Other impairments include loss of muscle tone, gross and fine motor functions, balance, control, coordination, reflexes, and posture.

If You Don't Know About Cerebral Palsy Sooner, You Won't Know How Much Time You Have To Seek Help

Today I read on a Facebook post that a family didn't know their child had Cerebral Palsy until he was 10 years old. We've had a case where the mom knew her son had cerebral palsy but the hospital never told her the cause, even though he got all of his medical care there.

The time limits vary in DC, Maryland, and Virginia for bringing a case for a child who was injured or has cerebral palsy, but the time limits are longer for children than adults, so don't think that you have run out of time - call us and we can tell you how much time you have left on the statute of limitations.

At Donahoe Kearney we specialize in Cerebral Palsy cases, so we know exactly what to look for in medical records, exactly which developmental delays to watch for, and how to manage opposing doctors, lawyers, and others who are protecting the interests of the hospital and its insurance company. Give us a call today for a free investigation and to learn more about our process. You can reach us at (202)-393-3320.