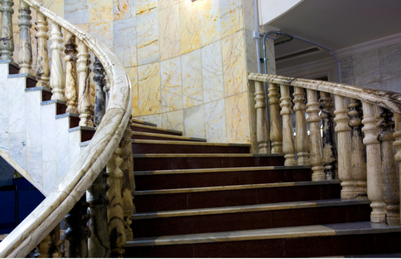 Most People Think it Will Never Happen ot them - but it can.  And here's what happens when it does.

People who work in offices and professional jobs should have less risk of getting hurt at work than construction workers, plumbers, steamfitters and electricians.  And that's true.  But people in the construction injury usually know more about the workers comp system because even if it doesn't happen to them, they've seen co-workers get hurt on construction sites before.

This is a story about a professional, working at a foundation in DC, who had a serious injury at work.

She was attending a meeting at an older, ornate building when she slipped and fell on a marble staircase, landing on her shoulder.  Since she was "on the clock" or there for work, she was covered by workers compensation - something every employer is supposed to have insurance for.  But no one in HR really knew what they were doing, or how to process a workers comp claim, they just don't have that many of them. Plus, this workers was high up in the company and earning a high salary.

And remember - workers comp doesn't mean you are "suing" your company - it's something quite different.  A lot of people are worried about this at first, but it's not the case - your company's workers comp insurance company usually handles everything.  But you still need to file a claim for workers comp benefits with the proper agency.

This got straightened out and the workers comp insurance company started paying for the treatment she needed.  Unfortunately, after landing on her shoulder, and after physical therapy and injections didn't help the pain and lack of mobility with the shoulder, an MRI showed a need for surgery.

Despite aggressive rehab, this worker developed nerve damage that required an additional surgery and consultations with several specialists.

With a lot of the physical, heavy duty jobs our clients do, like construction, they would not be able to return to work after an injury like this that required surgery.  But this worker, although she had to travel occasionally, was a manager, working in an office.  So she was able to go back to work after recovering from surgery (and was paid workers comp benefits while recovering of course).

There was no doubt she would have a permanent injury to that shoulder and arm, and we used that as leverage to settle the case with the workers comp insurance company, making sure she was compensated for the permanent injury, any flare-ups or recurrences she could have, as well as the medical treatment she may need for the injury. She also had changed jobs by this time - to a similar type job with a different company - so you can still settle your case if you switch jobs.

It was a great decision to reach out to us - and the settlement we were able to get for her made a big difference. Workers comp in DC is a complicated process and system, even if you are used to dealing with complicated things (we represent professors, doctors and executives) this isn't something you've dealt with before.