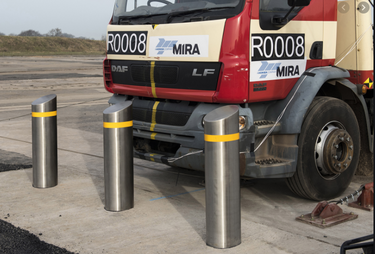 A stage hand is a heavy duty job - setting up and breaking down everything needed to put on live events - concerts, rallies, seminars.  It means hauling trusses, building stages, hanging overhead lights. And our client was one of the best - years of hard work touring the country with every big name band you can imagine had paid off. He was at the absolute top of the profession, called in to work the biggest performances, the biggest names.

But after unloading for a big event in Washington, D.C., he was driving the 26 foot box truck off the facility when a security guard raised the security bollards underneath his truck as he drove over them (those are the metal poles that are meant to keep terrorists off the property and can be raised and lowered into the ground from a control tower). The security bollards jolted his truck, jamming his neck and shoulder. He was seriously injured.

After 3 or 4 months of therapy, an orthopedic specialist recommended neck surgery due to the herniated discs caused by the security company raising the bollards under his truck.

Even Though The Liability Was Obvious, The Insurance Company Fought The Claim

The company's own surveillance video showed they were wrong and the driver did what he was supposed to - so you would think they immediately took responsibility for the harms they caused, right? Of course they didn't. They refused to take responsibility or make any offer of settlement until our lawsuit forced them to do just that (we tried before even filing the case, but they didn't do a darn thing until we forced them to be accountable through litigation). They said all of his problems came from aging or a degenerative process - a pretty common insurance company excuse to avoid responsibility...

If You Need Help With A Worker Comp Claim Contact Us Today!

The result was the driver was able to make up for some of the financial harms and losses he had and move forward with his life. Are you struggling with questions after a serious accident?  Most people are - do you know whether you can use your health insurance to get the medical treatment you need?  What do you do if you can't go back to work?  And how do you find out how much insurance coverage the other driver has?

Get started getting these questions answered and reducing your stress level - by calling us now at (202) 393 - 3320 for a confidential, no obligation discussion of your situation, or order one of our informational guides and reports to help you stay ahead of the insurance company.