The insurance company said her injury was all due to a pre-existing condition. Still we were able to get her benefits and a nice settlement at the end of her case. 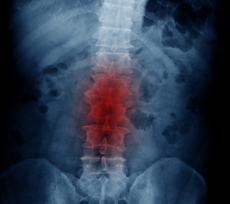 If you have a pre-existing condition that was aggravated by a work injury, or made worse or made symptomatic, your medical evidence and the opinions of your doctors are critical - the workers comp insurance doctor, like in this case, will say your problems are all due to the underlying condition. We can still help you get workers comp benfefits.

A communications director working for a non-profit in Washington, D.C. had struggled with a bad back, off and on for years, getting treatment for it - mostly masssage therapy and physical therapy when it flared up.  She could manage the flare-ups and back pain.  And her job was extremely fast paced - with deadlines just about every day, she often kept a frantic pace to get things out.

It wasn't usually a physically demanding job, but there were times when you had to do everything you could to put on a presentation or an event.  And unfortunately, we're talking about one of those times.

While lifting cases of water out of her trunk (not usually her job, someone had not shown up for work or forgot to get water for a conference they were hosting) the communications director felt a pull in her back.  She tried to work through it, get through it but it kept getting worse.

She was referred to spinal surgeons for an evaluation once all of the PT, massages, heat, ice, pain meds, etc. weren't working.  And they determined, after MRIs, that she had a degenerative condition in both her back and neck - all up and down the spine.

Workers Comp Insurance Usually Denies Your Case If You Have A Pre-Existing Condition.

As you can imagine, no workers comp insurance company wants to hear that - we have to pay for neck surgery to fix your injured back?  But the evidence backed it up, and shortly into the litigation, they agreed to authorize the first surgery.  After a long rehab, the back surgery was performed safely about a year later.  That followed more rehab and therapy and another surgery to remove the hardware.

The communications director never gave up - fighting for different therapies, weaning herself from the pain medication, and working hard every day to get better.  Her company had long ago filled her job, and there was a big dispute on what she was now capable of physically (the insurance doctor, hired to perform a so called "independent medical exam" who saw her twice, said everything was due to the pre-existing condition, and lifting a case of water had nothing to do with her need for surgeries).

Shortly before a court hearing on her case, we reached a settlement that will take care of her likely reduced future earnings and future medical expenses.

If You Have a Pre-existing Condition And You've Been Denied Workers Comp, We Can Still Help You

Problems with the workers comp insurance company?  Don't wait to call if it's a serious injury - one mistake could kill your case and you could lose your benefits and medical treatment. But we have a lot of experience with conditions that are re-aggravated and getting workers comp and medical treatment benefits for people like the communications director. Don't let the insurance company convince you that you don't have a case. Contact our experienced workers compensation lawyers today. We can help. 202-393-3320