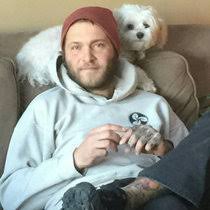 Most union workers in the building trades - plumbers, electricians, elevator mechanics, steamfitters, pipe fitters, construction workers have physical heavy duty jobs.  When you're building something, you have to lift and carry tools, equipment and materials.  Sometimes these union workers are working on a ladder or scaffold to get the job done.

And let's face it, with a job like that, you're at risk for serious injuries no matter how well you protect yourself - the risk is always there.

Now imagine you're a rigger with IATSE Local 22 (the International Association of Theatrical and Stage Employees) and  your job is to set up for concerts, shows and events in D.C., usually at Capital One Arena and other venues in the city. This is fast paced production work - everything has to be unloaded, set up and built before the event.

You're doing a lot of the same work that other union workers in the building trades do, but you're doing it on a catwalk 100 feet in the air.

Here's the story of one of our guys, a rigger and stagehand in incredible physical shape.

His crew had worked all day unloading the equipment and set for a big concert at Capital One Arena.  The stage had been set up and the trusses built and in place, so the massive video screens could be fit together and hung.  This rigger was on a catwalk 100 feet above it all and using a pulley system to get equipment, lights and materials up so they could be put in place and tested.

Even with mechanical scaffolds, cherry pickers a lot of the equipment has to be moved and put into place by hand - it is delicate and expensive and has to fit together.

The rigger was pulling up a motor on a chain, standing on the 2 foot wide catwalk above everything when he felt the pop in his back.  He had fall protection on and sat down on the beam. He couldn't move.  After awhile, other stagehands and riggers helped him off the beam and down to the ground.  He knew the injury was serious.

Like a lot of union workers in the industry, he lived outside the area, working when he was needed to set up shows and taking other jobs when they came around, all over the country - a freedom he enjoyed and thrived on.

He tried every type of therapy and treatment to get better and avoid having back surgery.  After 2 years of rehab and hard work, he still wasn't back to how he felt before the injury.  And his case was complicated, at first, by the fact that they tried to have him file his workers compensation claim in Virginia instead of in D.C. where he got hurt (this would have been a major mistake because the workers comp benefit rate is lower in Virginia and Maryland than it is in D.C.).

Once we got that issue, and some of the complicated issues about his wages (he worked different jobs) squared away and once he was seeing the right doctors and doing well in rehab, it was time to consider settlement - so he could have the freedom to travel, to take other jobs, and not have a case hanging over his head.

The settlement of his DC workers comp case (after we made sure he received all the benefits while he couldn't work at all) provides him with the financial security to change jobs, move, and live his life the way he wants to live.  It can't take away the pain or the injury, but for a lot of people, a settlement can give them a fresh start - we've seen it over and over.

And that's what we focus on.

Free Books, Guides and Reports on the Workers Comp System

Q and A on Injuries at Work

More Info on How Workers Comp Can Help You

What people say about us