How do we keep doctors accountable? Recommendations and a FREE GIFT

A Parents Guide: Picking Up The Pieces After Medical MalpracticeRequest Information

NBC Washington reported that a local Vienna man won $500,000 in his medical malpractice case against his doctors who were found to be insulting him while he was under anesthesia during an otherwise routine colonoscopy.

He unintentionally recorded his anesthesiologist and other doctors repeatedly mocking him by saying things about how much medicine would be needed to anesthesitize him, wanting to punch him in the face, a lie that he had an STD, and other either intentionally rude, lewd, or inaccurate comments.

They probably should have been paying attention to what they were doing.

After surgery, the man discovered the recording on his phone and decided to sue for medical malpractice and defamation, among other claims. A Reston jury found that the health care professionals were negligent and awarded him $500,000.

This continues the debate about how best to keep doctors accountable.

Some have even suggested cameras in hospitals and surgery rooms as a way to keep health care professionals focused and accountable.

But, what do you think? 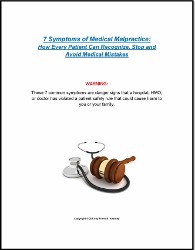 Medical malpractice happens when doctors, nurses and hospitals do not follow established patient safety rules.  Many times the doctors are not working together, not communicating with each other, or the hospital does not have a system for identifying and correcting common medical mistakes that can seriously harm patients. And many hospitals are not being held accountable for the the serious harm they do to patients.

At Donahoe Kearney, we've been holding hospitals and other health care providers in the area accountable when they harm everyday patients, and we can do the same for you. We've published the 7 Symptoms of Medical Malpractice - an easy to read report for absolutely FREE to those looking to avoid and catch medical malpractice before a patient is harmed.

If you've been injured in a hospital in DC, MD or VA, don't hesistate to contact us - either by phone or on our website here. We'll review the details of your case for free, answer your questions, and then help you determine your best steps forward.